Lighting is fundamental when it comes to any creative endeavor, especially in photography, film, and television. This task needs to be performed with additional care when capturing darker subjects, more so in dark environments. With the rise of an increased presence of Black television and film pushing more of our narratives forward, our visual appearance on screen is looking better too.

As Vox explains, color film was initially created for white people. The color balance and gradient in the 1940s and 50s were literally called Shirley cards  — assumed to be named after the first person pictured on the card. These were used as a standard for developing the color film. Chemicals used to develop various yellow, red, and brown tones were left out when it came to processing the film, which meant darker skin tones and other textures were indistinguishable. This changed in the 1970s when wood furniture and chocolate industries complained that their products weren’t being captured correctly, according to Dr. Lorna Roth, Communications and Researcher at Concordia University in Montreal. These differences became more apparent as television and film became more diverse.

In the 1990s, inventors developed a camera system that uses two different computer chips to balance lighter and darker skin tones, individually. The LDK Camera uses this system and is what you’d find on Oprah’s set. Her daytime talk show was one of the TV shows known for lighting and shooting specifically for Oprah and people of a darker hue. BET did the same. Unfortunately, The Fresh Prince of Bel-Air used the conventional route of dialing up the IRE (a measurement of composite video signals), which as a result, showcases black skin but causes overly bright images.

Fast forward to today, and we have numerous creators of color pushing more diverse narratives forward, and that opens the conversation around lighting and shooting dark skin people. Issa Rae’s HBO-hit Insecure consists of numerous night shots — at the club, on the block, or in the car because Issa is a Lyft driver — and every single person of color is glowing. As the show’s director of photography, Ava Berkofsky tells Mic, “When I was in film school, no one ever talked about lighting nonwhite people.”

“There are all these general rules about lighting people of color, like throw green light or amber light at them. It’s weird,” she adds.

To ensure the show had the requested movie-like quality and luminous look on all subjects, Berkofsky said the skin needs to be reflective, so she makes sure the make-up artist uses a reflective base on the skin. She also notes that the amount or intensity of light is not so important, but rather the surface area of the light. She also shoots with a polarizer attached to the front of the lens to help her shape the light.

Barry Jenkins’ Moonlight is another film that brilliantly features dark skin, but the bright contrasting colors of Miami, where the film is set. Jenkins told Indiewire, “We wanted to embrace the tension of that beauty, juxtaposed with the very dark things that are happening to the characters in the story.” He and cinematographer James Laxton worked together to create more of a dream-like landscape with vivid color rather than the realist look of most American indie films. 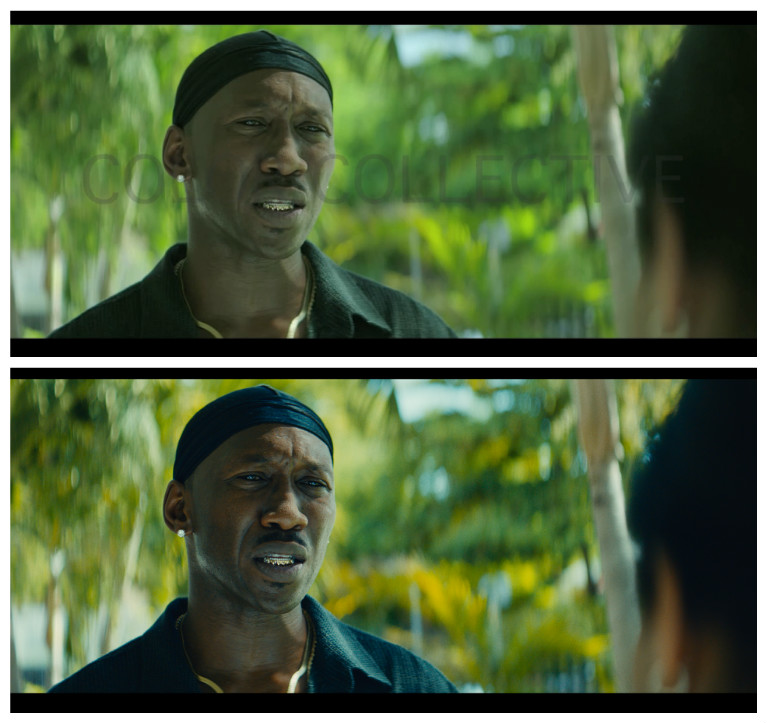 Photo: Color Corrective and A24, Indiewire

Colorist Alex Bickel was brought on to experiment with grades to get both the vivid color palette and the “emotional quality” of what Jenkins wanted. The team also played with film stocks, using the German Agfa film stock to achieve more blue-green hues, like those seen in the second section of “Moonlight.”

And what about the Blockbuster hit Black Panther? The stunning cinematography can answer that question. The chief lighting technician and the make-up team worked together to ensure whether in shade or in light, all subjects were never under- or over-exposed because any basic photographer can tell you if a scene or subject is too dark or off-color. Today’s technology can only correct so much before things get distorted. Sian Richard, Chadwick Boseman’s personal make-up artist for the film, told Wired, “Some of this stuff you wouldn’t see with the naked eye can be spotted by the camera.”

In addition, many, if not most, pivotal scenes were filmed outdoors which called for additional diffusers to adjust, direct, and essentially control the sun. Chief electrician Dan Cornwall told Wired, the diffusers also rectify a major error that made Black actors look artificially lit and unbalanced in a scene. “For many years, actors of color would be given individual light sources so that they would balance out a little better when standing next to an actor with a lighter skin tone.”

Marvel Studios' #BlackPanther is nominated for Best Motion Picture at the Academy Awards! Tune in to the #Oscars on ABC tonight at 5pm PT/8pm ET.

It takes multiple teams — from cinematographers, colorists, lighting technicians, and make-up artists —  to do their part to ensure we look our best on screen. As TV and film cast become more diverse, it’s just as important that the crew is just as diverse and knowledgeable, too.

Read Next: Jordan Peele Celebrates ‘US’ With Special Screening for Black Journalists at SXSW

Covering POP culture for the culture!