The promotional period before an album release is probably the most essential part of the music business aside from the music itself. This is the critical time artists develop creative marketing strategies to peak interest and generate conversation around their anticipated projects. Now that we are in a digital-crazed world where traditional media roll-outs aren’t regarded the same, artists have to rely on far more craftier ideas to capture their audience.

While some artists like Nicki Minaj or Kanye West miscalculated their album releases during the initial roll-out, they inadvertently generated controversy commentary around their artistry and musicianship, which helped their album and streaming sales. However, a botchy roll-out might leave bruises on an artist’s brand dissolving trust and consistency between them and the public.

Every part of the album process should be accounted for that benefits both the artist and the fans. Artists who can physically amplify their project understand the value they possess in building an authentic fan base that respects and cares for the art and the artist. The element of physically connecting to your fans shouldn’t be lost on how artists develop their album roll-outs. Strategic marketing campaigns should be noted as a two-way street where the artists respect the fan’s intelligence when it comes to engagement. If you are going to manipulate consumer interest, do it in a way that is tasteful.

Check Out These Seven Artists Who Mastered the Art of an Album Roll-Out:

my fans chose me so ima choose them every single time. had my listening party in East Atlanta at a drive-in movie theater & randomly hopped in a few cars to see the reactions first hand. no other way i could’ve done this 💌 #eastatlantaloveletter out now! 📽: @joemoore724

Grammy-nominated East Atlanta native, 6lack came prepared to show up for his fans. For his sophomore album, he left no stone unturned in capturing how an artist should connect with their audience. He hosted a listening party at Starlight Drive-In Theater before the official release of his album. Guests arrived at the drive-in and were encouraged to listen to the project in the car with their friends. Based on his music and personality, 6lack used this moment to create the perfect environment for an intimate car test experience. The best way to listen to new music is with your closest friends in the car. He also engaged with his fans by hopping in the car to get their reactions and taking photos.

Walk in the traphouse, use my Cartiers for credentials

For his fourth studio album, 2 Chainz brought the trap to life with this genius marketing campaign in partnership with Spotify. With a curated playlist attached to the rollout, they revamped a house in Atlanta, Georgia coating it a pink color with the word “T R A P” written on the front. 2 Chainz pushed his creative boundaries with an immersive experience as he brought the trap to life inviting the public to interact with elements of his upbringing and subject matter covered on the album. Alongside the hashtag The Pink Trap House, this became a magnet for photo ops and tourists generating traffic – both digitally and physically – to the location.

What intended to be a limited promotional run for the album, shifted into Atlanta’s newest, yet temporary landmark. The installation became a form of community engagement as it hosted sip & paint events and offered free HIV testing.

Taking it a step further, he made sure the campaign didn’t just relate to women by a simple gesture of the color pink. He communicated to the tribe of women, who are faithful listeners of trap music, by opening a pop-up themed nail salon where nail designs were named after a track. One thing is for sure; pretty girls always make sure their nails are done. 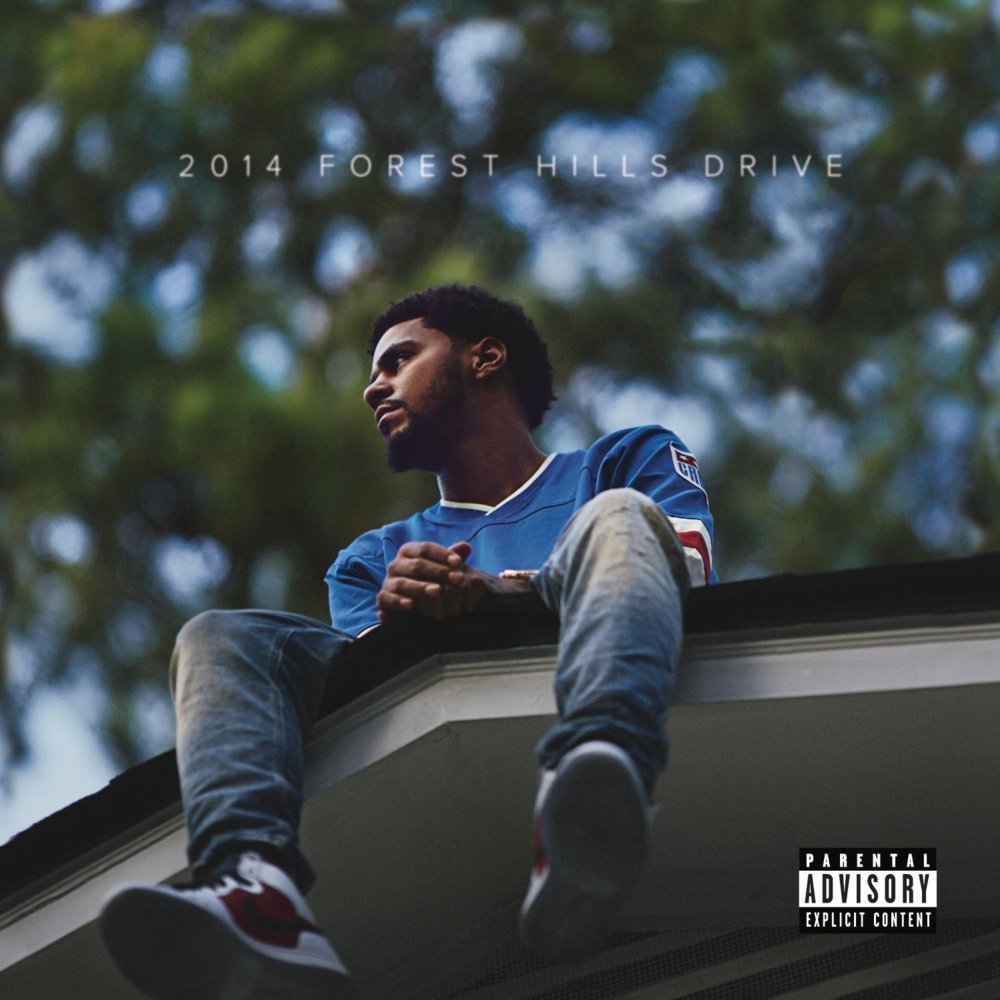 2014 Forest Hills Drive became a recent historical landmark for J. Cole. He archived his childhood home in the title of the album refers to the Fayetteville, North Carolina address, which he repurchased. With an HBO special, he documented his return home and his journey since attaining fame and success.

Instead of the fancy industry-heavy listening parties, he inverted protocol and went on a “personal tour.”

Maaaannn today marks a year since @JColeNC came to the crib for FHD listening session aahh 1 of the BEST DAYS EVER!! pic.twitter.com/Nl5HdDADex

In addition to having an intimate listening session in his childhood home, he went on the road to meet fans and personally played the album for them in their homes. He bypassed his press run and hired radio personality, Rikki Martinez, to be the official Dreamville correspondent. She followed and documented J. Cole during his travel around the United States as he met his fans.

Four years after the critically acclaimed release of his  2012 debut album, Frank Ocean began teasing fans with the ever elusive release date for his highly-anticipated sophomore album. In July of 2016, the elusive artist posted a photo to his website of a library card that included several dates for, what fans assumed to be, his new album release date. As the month of July came and went, rumors began to circulate of an August 5th release date for his album to drop…and still, nothing. Finally on August 20, 2016, after months of teasing, Ocean dropped his hit sophomore album, Blonde.

Suddenly, mysterious Tidal billboards, posters, and taxi cab ads around New York City appeared with just the timestamp printed. Online ads gave away another clue that whatever these campaigns were for, they must be associated with Jay-Z since he’s a major investor in the streaming service.

It’s been four years since Magna Carta Holy Grail was released and Beyonce just debuted her fifth studio album Lemonade, which had allegations of infidelity. Aside from the long wait, if this album had any inclination of a confession about what happened in that elevator or a response to Bey singing, “You know I give you life. If you try this shit again, You gon’ lose your wife,” on “DON’T HURT YOURSELF,” then this album rollout deserves a place on this list. It’s a family affair of sharing the most vulnerable parts of his relationship discussing truths, pain, and forgiveness.

It’s always a game of chess when Jay-Z is involved. His business moves highlight the genius of him getting the most out of any situation. There was speculation that a visual project was accompanying the album similar to Lemonade, but they were just promotional pieces featuring Mahershala Ali, Lupita Nyong’o, and Danny Glover. 4:44 was a Tidal and Sprint exclusive for a week after the cell phone company announced their partnership, investing $200 million in the service.

No single, no press nor media announcements, yet gold inflatable Travis heads were found scattered across recognizable landmarks around the country building hype for his next highly anticipated project. He kept album details a secret but teased the public days before the official release date as the first blowup balloon was spotted on top of Amoeba Music in Los Angeles, California. He followed suit with various locations including his hometown, Houston, Texas in front of Minute Maid Park; Cactus Music, and Hard Rock Cafe in Times Square, New York. Kanye West isn’t new to the fashion of publicity stunts; however, this was the precursor to any promotional antics he would employ in the future surrounding the release of his projects. Building off misinformation, title changes, and a track listing in disarray, West used shock and confusion to generate commentary. The public is familiar and, hopefully, cherishes traditional rollouts, yet TLOP gave us the complete opposite.

It was an unconventional approach of an unwanted invitation inside the creative process of making an album as the public waits for an official release date. He kicked his ambitions into overdrive as he premiered the project during a live stream listening session/release party at Madison Square Garden doubling as a fashion show for Yeezy Season 3.

The DIY approach to this marketing experiment was impressive, yet exhausting, as he played the album off an aux cord hooked up to his laptop. Still, no announcement of the release date until three days later after his Saturday Night Live performance. Whether Kanye rented out MSG for the album or his fashion event, he understood he had all the attention – especially if the Kardashian-Jenner clan were in attendance.

Artists, your marketing and advertising strategies, are just as important as the music you put out. It’s equally creative as you and your team figure out the best way to visually and physically communicate your brand to the public. Be smart! Be as traditional or as unconventional as you can be and meet your fans where they are. The music details life experiences, but your album rollout shows us layers of creativity that connects you to your fans on a broader scale.

Read Next: The New Sound of Houston Rap Culture Belongs to Travis Scott

I enjoy the report

[…] Read Next: From Drive-Ins to Pink Trap Houses, The Best Album Rollouts Means Showing Up Where Your Fans Are […]

[…] From Drive-Ins to Pink Trap Houses, The Best Album Rollouts Means Showing Up Where Your Fans Are […]

[…] It’s a prominent measure for artists to cover their marketing and promotional bases. From album rollouts, press runs, and concerts, merch is an exclusive timestamp around an artist’s musical career. […]

[…] Read Next: From Drive-Ins to Pink Trap Houses, The Best Album Rollouts Means Showing Up Where Your Fans Are […]